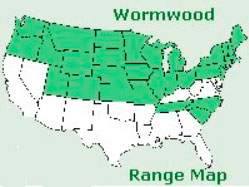 RANGE: Wormwood is actually native to Europe. It was introduced to North America in 1841. Now, it is naturalized across the northern United States and in Canada. It occurs from Nova Scotia west to British Columbia; south to Oregon and Utah; and east through Colorado and Nebraska to Virginia

DESCRIPTION: Wormwood is a spreading long-lived perennial herb, known for its aromatic gray-green leaves. An individual plant has 20 or more stems each growing 1 to 4 feet tall. The well-developed root system consists of a taproot occasionally reaching 2 inches in diameter with shallow lateral branches extending 6 feet in all directions. It reproduces primarily by seed and is a prolific seed producer. The seeds are easily scattered in hay and by wind, water, and animals. The plant starts growth in early spring and flower stalks are produced by mid-July. Its yellow flowers bloom from summer through fall, when the seeds mature.

This plant's Latin name, artemisia, illustrates that the herb was named after the goddess, Artemis, the goddess of hunt from Greek mythology. Wormwood has been used as a flavoring agent in alcoholic beverages, such as vermouth, bitters, and liqueurs. In the past, it was sometimes used in place of hops in the manufacture of beer. Until use of the product was curtailed in 1912, the essential oil was in great demand for the manufacture of the French liqueur absinthe. The plant is sometimes grown as an ornamental. 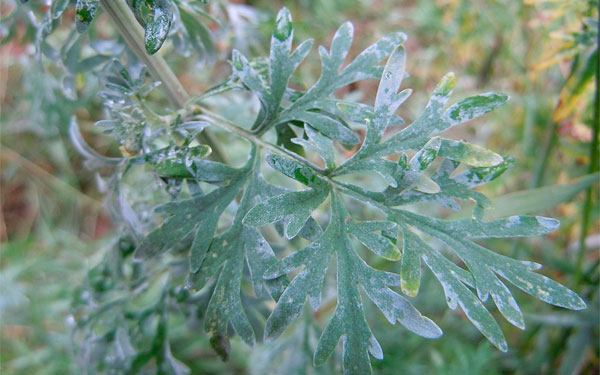 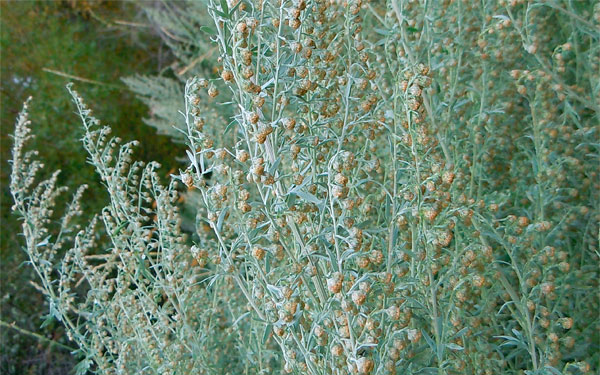 Wormwood, as the name suggests has been used for centuries as a powerful remedy to expel intestinal worms & parasites. As a truly bitter tonic, it is also useful for stomach & digestive complaints such as indigestion, hyperacidity and constipation. Additionally, wormwood is used to improve blood circulation, as a cardiac stimulant, as a pain reliever for women during labor, and as an agent against tumors and cancers. Folk remedies call for the employment of wormwood against colds, rheumatism, fevers, jaundice, diabetes, and arthritis.

This bitter botanical is very effective for ridding the body of worms (noted to be especially useful against roundworms, pinworms & threadworms). In its other popular use as a stomach medicine, wormwood’s bitter taste stimulates the flow of digestive secretions, making it a valuable aid for complaints of the digestive system, especially when such is due to a deficient quantity or quality of gastric juice. Externally, Wormwood can be applied as a compress or wash for itchy skin, rashes, bruises, lice and other skin irritations. For wounds, an excellent antiseptic poultice is prepared by mixing with an infusion of wormwood, with equal parts of Slippery Elm powder and very fine charcoal.

Dried leaves; flowering tops, & essential oil. The tops and leaves are gathered in midsummer and dried. The leaves are very bitter tasting.

The plant is recognized as a moth and insect repellent, particularly against fleas. Stuff your pets bedding with wormwood, to deter those pesky critters. You could also make a sachet filled with wormwood and place it in the bedding. Not only does it discourage the fleas, it leaves the bedding with a pleasant scent.